From The Archives: He’s Still Our MVP 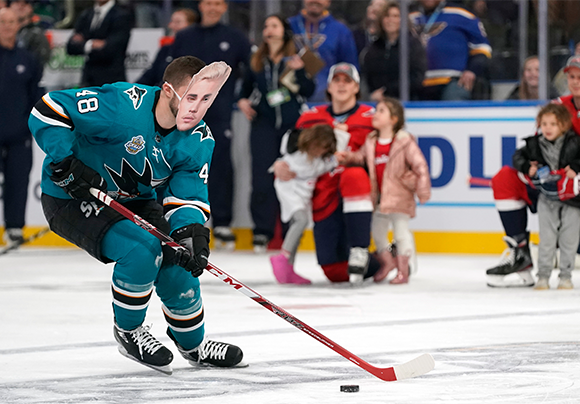 From The Archives: He’s Still Our MVP

This From The Archives feature story about Tomas Hertl’s All-Star Game experience appeared in the February-April 2020 edition of Sharks Magazine.

As soon as Tomas Hertl stepped off the plane, Francesca Ranieri knew she had her man.

The National Hockey League was looking for just the right All-Star to execute an idea that maybe not every player would be willing to do, or who could actually pull it off.  An executive assistant for league, Ranieri’s assignment was to find just the right person to wear a Justin Bieber mask during a skills event as part of All-Star Weekend in St. Louis.

“Right away I said, yes, it will be great,” Hertl said.

With the reputation of “fun must be always” and constantly flashing his ear-to-ear grin, Hertl would be the perfect fit for what the league was hoping to accomplish.

So when it came time for Hertl to attempt his second shot in the goalie save streak competition at Enterprise Center, he pulled the flat-faced paper mask from under his jersey, put it on, and skated in on Jordan Binnington much to the chagrin of the Blues’ goalie and to the delight of the sellout crowd in attendance.

Never mind Hertl could barely see the puck in front of his skates while trying to peer through the holes in the otherwise lifelike mask.

“The fans loved it,” said Hertl, whose shot was stopped. “That’s kind of what All-Stars is. It was fun, and made everyone feel relaxed. It was pretty fun to do it, and all the guys loved it, too.”

As for background, Binnington challenged the real Bieber on social media that he’d dye his hair platinum blonde if the pop singer could slip just one of 10 shootout attempts past him. A recreational hockey player on the side, Bieber accepted the challenge – expected to take place in the offseason – and suggested the loser donates $10,000 to the winner’s favorite charity.