From The Archives: A Career Is Worth A Thousand Games 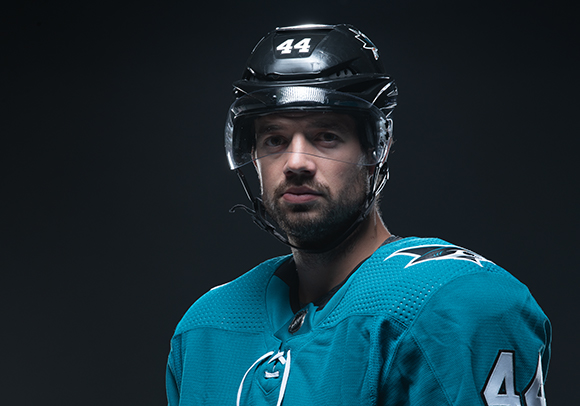 From The Archives: A Career Is Worth A Thousand Games

This From The Archives feature story about Marc-Eduoard Vlasic appeared in the December 2019/January-February 2020 edition of Sharks Magazine.

‘Behind every great man there’s a great woman.’

But it’s not completely accurate in describing Marc-Edouard Vlasic.

The saying for the Sharks defenseman should be modified to read: ‘Behind every great man there’s four great women.’

No slight to Marie-Josee Lord of Beaconsfield – Marc-Edouard’s mother – we’re counting his wife and three faithful canine companions who provide daily support and a loving escape from the pressures and grind of professional hockey.

Martine Auclair Vlasic and the couple’s three rescue dogs – Kelly, Macy and Nicky – do more for the San Jose defenseman’s career than they even know. But just as Vlasic arrives at a special career milestone, he takes time to recognize and credit what made playing 1,000 regular-season games in the National Hockey League possible.

“We came in this together,” Vlasic, who married his high school sweetheart. “We didn’t have all this, and we’re both in this together. She’s as much a part of this as I am.”

“This” would be a franchise first. Vlasic is the first blue liner drafted by San Jose to play 1,000 games with the club.

Selected with the 2005 second-round draft choice Doug Wilson received from Calgary in a trade for goalie Miikka Kiprusoff – the first player-for-pick in the general manager’s career – Vlasic did not disappoint. His journey started as the youngest defensemen in the league his rookie season of 2006-07.

Now, in his 14th year – and signed long-term for six more in San Jose – Vlasic’s list of personal accomplishments include:

That Vlasic has been one of the league’s premiere shutdown defensemen throughout his career is not news. It’s a big reason why in addition to his outstanding time with the Sharks he’s been a coveted member of Team Canada in international play. Vlasic won gold during the 2014 Winter Olympics. He was a World Cup champion in 2016. And four times he’s participated in the World Championships where he won silver medals twice.

Few, however, might know how he’s been able to maintain his high level of play. From breaking into the NHL as a teenager to reaching established veteran status presently at age 32, Vlasic has learned to adjust and adapt as time goes by.

“My first couple of years – you’re young without having played very many games – you just go, go, go,” the Montreal native said. “But as I get older I find I rest a little bit more.”

Vlasic typically takes time off once the season ends. He’s only missed the postseason once so he’s experienced one, two, three and even four rounds of Stanley Cup playoff series’.

“Because I’m playing more and more playoff games – those are almost double – I take maybe a month or a month and a half off, but when I get back into it I go a little harder than I did before,” he said. “Once you start, you’re not stopping. Once I start training in the summer it’s for the whole year.”

His top conditioning helps to account for durability and the fact he’s arrived at the 1,000-game plateau – just the 17th player to do it all for one team – and that he can be counted on to play big minutes against top-line opponents.

“I’m taking a lot of hits, playing a lot of minutes and it’s against tough competition,” Vlasic said. “If you get injured or not it’s just luck. That’s sports. Honestly, a guy who goes most of his career without getting injured is pretty lucky.”

Vlasic has been pretty lucky, too, with who he’s played alongside in San Jose. He detailed the list, and it’s a whose who of alumni Shark blue liners that include Scott Hannan, Craig Rivet, Rob Blake, Dan Boyle, Brent Burns, Justin Braun and currently – for the most part – two-time Norris Trophy winner Erik Karlsson.

“He’s a guy who has been around a long time, and he’s been a good player in this league for a long time,” Karlsson said. “And it might have taken a little while to figure out our tendencies, accepting what we are and utilizing each other as the best possible way, but it’s going great and hopefully it stays that way for a long time.”

While Vlasic recognizes the defensemen he’s skating alongside, he reflects, too, on the players he followed before breaking into the league and then tried to stop on a nightly basis. Those big-name opponents early on included Jaromir Jagr, Joe Sakic, Brendan Shanahan, Keith Tkachuk, Mike Modano, Jarome Iginla and Bill Guerin (who was later a teammate).

Just as fond, however, are the memories he has from his support system that keeps this all rolling on and on.

Two of the dogs have been with the Vlasics since they started their NHL journey.

Vlasic leaves hockey at the rink because whether it’s a win or a loss he knows those dogs will but put a smile on his face.

“When I come home they don’t know the difference between winning and losing, they just want my socks,” Vlasic said. “So I take off my socks. They want to eat, they want to go outside and do their business and now, all of a sudden, the game’s over for me because my dogs are so happy to see me.

Martine has just the right touch, too. Vlasic recalls before the 2014 Olympic roster was announced she surprised him with a Canadian ornament to put on his night stand as a reminder each morning what he was working toward each day. She’s done the same with creative gifts before subsequent playoff series to help motivate and inspire.

“She knows everything about hockey, she knows all the players,” Vlasic said. “The objective when I got here was to win. It’s never changed. And she wants to win as much as I do.”

Winning has been a constant for Vlasic his entire career. No two current defensemen around the league besides he and Boston’s Zdeno Chara have been a part of more wins since 2006, a stat Vlasic holds dear to his heart.

“I’m the same guy now as when I arrived, I’m just 14 years older,” Vlasic said. “I go out there to make the right plays against the best players and just try to win hockey games.”

Ross McKeon has covered the San Jose Sharks and the National Hockey League for 29 years at the San Francisco Chronicle, S.F. Examiner and Yahoo! Sports & authored “100 Things Sharks Fans Should Know & Do Before They Die” and, with Dan Rusanowsky, co-authored “If These Walls Could Talk/Sharks.” Follow on Twitter: @rossmckeon

One comment on “From The Archives: A Career Is Worth A Thousand Games”