From The Archives: Developing The Dane 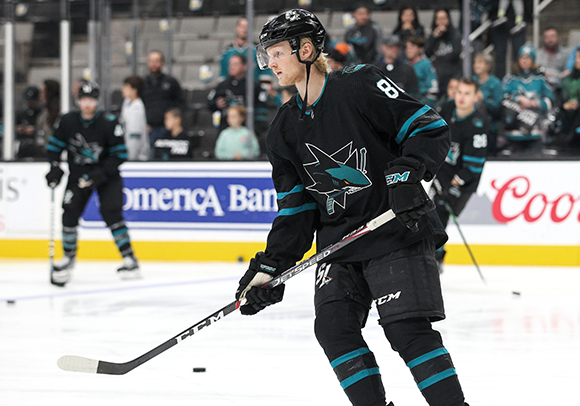 From The Archives: Developing The Dane

This From The Archives feature story about Joachim Blichfeld appeared in the February-April 2020 edition of Sharks Magazine.

In Denmark, there is a driveway. The future of the Sharks’ offense may depend on what happened there.

If that sounds overly dramatic, then someone needs to figure out a better way to stress how important Joachim Blichfeld could be to the organization.

As a kid, Blichfeld shot puck after puck in that Danish driveway. He pounded rubber for a couple of hours every day into the regulation hockey goal and net that his dad bought and planted there.

This was an unusual sight in Blichfeld’s hometown of Frederikshavn, located way, way up there on the north coast of a country where hockey is not exactly king – or even a duke or viscount.

“Not very many people play hockey in Denmark,” says Alex True, who is Blichfeld’s fellow countryman on the San Jose Barracuda roster.  “So, if you are a hockey player, it’s almost like you know every other hockey player.”

Blichfeld emerged from Denmark’s hockey non-hotbed because he was that crazy kid who kept shooting those shots in that driveway, as neighbors looked on with both puzzlement and admiration. But the shots paid off.

At age 16, Blichfeld left the driveway and his local team to go play in Sweden.

At age 18, Blichfeld was drafted by the Sharks in the seventh round.

At age 20, Blichfeld was playing junior hockey in the USA and scored 53 goals for the Portland Winterhawks.

Wait a minute. Did someone say 53 goals?

Yes. In the 2018-19 season, Blichfeld’s 53 goals with Portland, combined with 61 assists, gave him 114 points. This earned him the Most Valuable Player trophy in the Western Hockey League. It explains why the expectations are so great for The Driveway Dane, who is spending the 2019-20 season in San Jose with the Barracuda of the American Hockey League and an occasional call-up to the Sharks themselves.

It is uncertain when Blichfeld will be ready to play in the NHL full time – or even if he will ever be ready, because there are no guarantees in hockey. But we know some things.

We know that older Shark point-producers such as Joe Thornton and Patrick Marleau will retire, sooner or later. We know that the Sharks do not own a No. 1 draft choice in 2020 to select a potential big goal scorer.  We know that other Shark prospects can do other stuff, but none have scored 53 goals recently. And we know that during the first two-thirds of this season, goals were hard to come by for the Sharks.

Thus, fairly or unfairly, the hopes and dreams of many Shark followers for a future offensive lift fall on the shoulders (and wrists) of Blichfeld. He isn’t thinking about that every minute of every day. But he is thinking about it.

“Everybody says to have patience because my time will come,” Blichfeld said. “And I’m looking forward to that.”

It’s going okay for him with the Barracuda. Through his first 30 games with the team, he accumulated 13 goals and 26 points. Like most young skaters, he has had shifts of brilliance and shifts of not-enough-intensity.

“He’s got a lot of enthusiasm for the game with a high-skilled, shooting mentality,” says Jimmy Bonneau, the Barracuda’s co-coach. “He’s learning the pro game, pro habits. The daily routine and daily grind are a lot different from junior. The details in his game need to be focused.  That kind of happens with a lot of high-skilled players who come up from junior.”

The more-focused details for Blichfeld, it will come as no surprise to learn, need mostly to happen on the defensive side of the red line or in the corners on the forecheck. In youth and junior hockey, goal scorers can get by with allowing teammates to handle the dirty work. That isn’t possible at the NHL level.

But there are also details that can be sharpened on offense – taking straighter lines to the net, timing shots perfectly, learning when to be disciplined and when to take chances. And doing it with consistently.

“You’ve got to be on your toes every shift,” Blichfeld says. “All the little things—getting pucks out, be tough on the boards, work hard every shift. I know it sounds cliché, but that’s how it is.”

“I think it’s just a mindset,” says Michael Chiasson, the Barracuda’s other co-coach. “It’s not just showing you’re on target with your passes and your shots. It’s a mentality that you have to come to the rink every day and show the organization that you belong on the Sharks and are going to be a piece of the team for a long time. I’ve seen glimpses and pockets of time when he does it day in and day out and, with a young guy, there are times when there’s a game or a day off where he’s not great.”

When Blichfeld is great, though, he is definitely great. No one is anticipating that he will score 50 goals in the NHL.  But why rule it out completely? His achievements in Portland, where he played three seasons, were legendary. During the 2018 WHL playoffs, Blichfeld scored two goals in seven seconds against Spokane to turn a one-goal deficit into a one-goal lead.

But another game stands out for Mike Johnston, the Winterhawks’ head coach and a former NHL head coach in Pittsburgh Penguins. At the 2019 WHL award ceremonies, Johnston recalled one rugged road trip with Portland playing a physically-taxing third game in three nights. In the third game, Blichfeld scored a hat trick – including his 100th point and 50th goal of the season – to help Portland pull out a victory.

“A lot of guys in that situation can use excuses,” Johnston said. “But he came into that game and said, ‘I’m going to make a difference.’’’

However, what impressed Johnston most was still Blichfeld’s overall development during his three years in Oregon.

“For a lot of European players, the biggest adjustment is the bigger ice surface,” Johnston said. “There’s less time, less space. That’s the biggest thing Joachim has learned here, to shoot quicker. He’s got an Ovechkin-like shot and he gets it away fast. But he took too much time that first year in North America.”

Of course, with Blichfeld showing more maturity and  . . .

Wait a minute. Did someone say “Ovechkin-like shot?”

Yes. Some folks actually believe that Blichfeld’s puck-launching form is worthy of comparison to Alex Ovechkin, the Washington Capitals’ eight-time goal-scoring champion. But deflating the hype might be advisable. There is only one Ovechkin. But what everyone agrees on is, Blichfeld knows how to fire away.

The trick he must learn at the AHL and NHL level, though, is getting to the proper spot to pull the trigger. As a coach, Chiasson gets most excited when he sees Blichfeld grasp that skill.

“It’s when he finds that soft area of the ice in the O-zone, whether it’s on a line rush or a faceoff play,” Chiasson says. “He’s one of those rare guys that doesn’t need six, seven or eight Grade A chances to score. He might need one or two. But if you don’t get to that spot, the puck can’t find you.”

Bonneau, the other Barracuda coach, likes something else he’s seen from Blichfeld this season.

“It’s his release point,” Bonneau says. “You know, the higher the level of hockey, the more sticks are getting in the way. And you’ve got less room to create for yourself. That’s why release point is so important. And he’s got that ability. But he also spends a lot of time in practice working on that shot from different areas of the ice. When the game is not coming to him much, he’s being a better option without the puck.”

Blichfeld has also been open to tips and advice from more experienced Barracuda teammates. He’s no phlegmatic Scandinavian. Despite his AHL rookie status, “Blichy” is a vocal presence in the dressing room and on bus rides. True has known Blichfeld for five years and played with him on the Danish junior national team. They share a San Jose apartment. Blichfeld’s wit and self-assurance never take a day off.

“He thinks he’s good at everything,” True says of his friend. “His confidence is through the roof. But . . . his actions don’t always match his words. He says he’s a really good cook and he cooks maybe like once a month. We were golfing one time at Santa Teresa. He played the first two holes and he was just terrible. So, we ended up going home after three holes.”

True laughs. He says one impressive thing he has learned about Blichfeld as a roommate is how smart he is. But then . . . well, the tattoo.

It seems that one day a few years ago, Blichfeld and a pal decided on a whim to get their first ink.

“So, we drove down to the tattoo artist,” Blichfeld says, “and I didn’t know what I was going to get. He opened the book and I pointed and said, ‘I’m going with that one.’”

The tattoo, on his right forearm, was that of a beautiful crown. Which very much resembles the Los Angeles Kings logo. That’s correct. One of the Sharks’ biggest rivals.

He has rallied from that mistake by surrounding the crown with the names and birthdays of his family members – including those of his father, who originally laid out the krone (Danish currency) to buy that regulation net in Frederikshavn all those years ago.

The Driveway Dane is still pounding the rubber. San Jose and the Sharks can’t wait to see him doing it against the Kings and the rest of the NHL.

MARK PURDY was a Mercury News sports columnist from 1984 until his 2017 retirement. He covered the Sharks from their birth in 1991 and gave them their “Los Tiburones” nickname. During his tenure, Purdy was honored by the Associated Press Sports Editors and Wall Street Journal for writing one of America’s Top 10 sports columns. He was part of the Mercury News staff that received a Pulitzer Prize for coverage of the 1989 Loma Prieta “World Series Earthquake.” He is currently a San Jose State adjunct journalism instructor.