In this edition of Perspectives from the Past, Devin Setoguchi writes about his transition to retirement, the resulting struggles, and how he bounced back.  Devin Setoguchi played four seasons and 267 regular season games for the Sharks from 2007-2011.  He was drafted by the San Jose Sharks in the first round, eighth overall, in the 2005 NHL Entry Draft  and was the first Sharks rookie ever to score two goals in his first NHL game.  Devin now works as an analyst on NBC Sports California and will soon be opening a gym franchise called F45 in Willow Glen

I had two more surgeries in my final year of professional hockey, to bring the total to 9 in 11 seasons.  And I played through them, like I had all the previous times.  As I sat at home recovering, knowing that I had another year on my contract in Germany, I realized that it wasn’t working out for me.  So, I retired.  For the first time since I could remember, I was no longer a professional hockey player.

I didn’t do any rehab for my surgeries.  I mean, I had no reason to.  I no longer needed to get back into playing shape.  In fact, I didn’t do anything; I didn’t even go to see anybody about it.  Before I knew it, I had gained 22 pounds.  And I was miserable. 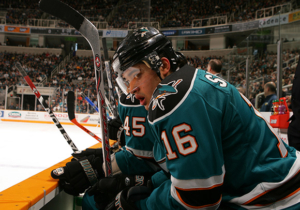 Things in my life had spiraled.  One thing led to another, and I ended up in rehab for the first time. And this was before I stopped playing.  I was able to stay sober for a while, but then I ended my career and the realization of no longer being a professional athlete hit me.  I had lost my identity.  I had been known to do one thing – hockey – my whole life, and all of a sudden, that was gone.  I didn’t know who to be without hockey.

I wasn’t a responsible adult while I was in the League.  I was a kid that at 17 was given a signing bonus, and then no one was able to tell me ‘no’. I was my own boss. I had the finances to do whatever I wanted.  And I had an addiction problem. And once I retired, my mindset really didn’t change.  I still thought I could do what I wanted, when I wanted, and no one could tell me otherwise.  I didn’t want to grow up.  And things got bad.

I ended up going back into rehab in an outpatient program.  There, I learned a lot about myself, and a lot about my feelings.  I learned about how hockey players, and professionals in general, are taught, from the very beginning, that we aren’t supposed to talk about our feelings; we’re not supposed to show emotion; we’re not supposed to be normal human beings.  We were told we are supposed to be someone that can show up every night, someone that can play through 9 surgeries and never miss a game – and I did that.  So, I had to re-learn how to be a person with emotion and feelings, and strengths and weaknesses.  I went and talked to people about it and had my therapy sessions.  In order to get my life back on track and get to where I am now, I needed to do that soul-searching.  I needed to find out what was going to make me take responsibility for things in my past and move forward from them, and, truthfully, move on from hockey.  It was one of the hardest things I have ever done, but it was one of the best things I have ever done.

Today, I can say I am a better friend, a better husband, and a better dad.  In fact, I think I have become an amazing dad. I figured out that what got me to where I was in my hockey career, doesn’t work as a family man. My relationship with my wife and my family is honest and open, and stronger than ever. I used to think taking lavish vacations and spending money is what would make me happy, but now, I am happiest when I can drop off and pick my son up from school, listening to him babble in the backseat, and when I read with him and put him to bed. I am in a great space. And I want to stay here.  So, I go to meetings, I talk to other men about my feelings – I express to them when I am hurting, I call someone when I am not feeling well, and I don’t lie anymore.  I don’t make excuses anymore. I am accountable; I show up when I say I will.  None of that would be possible if I wasn’t able to look down at myself and forgive myself for the person I was and move on to something and someone new.

My wife Kelly has also been a vital piece of my progress.  She is the one person who has stuck by me through everything. I wouldn’t be where I am right now without her love and support. Every day I am reminded how blessed I am to have her by my side. She was the one who kept me going when I didn’t think it was possible, and she is the one that keeps me going now.  My family is my world and I am thankful that I get this second chance at life after hockey with them by my side. 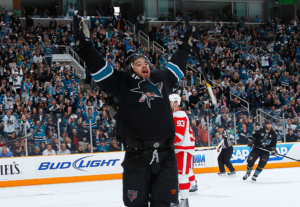 I have found that a lot of what helps me stay on the path I want to be on is health and fitness. When I eat healthfully, I feel good. I don’t mean strict diets, cutting carbs, counting calories – none of that.  I just eat like a normal person. I eat normal portions; or at least what was a normal portion 20 years ago before burgers were 3 times too big and cans of coke were super-sized. And I also workout. I didn’t do any of this when I first retired, and it was the worst I have ever felt. I was ashamed of my body and felt guilty because I knew it was my fault.  Learning how important exercise is to my mindset has been a crucial step in my post-hockey life.  It’s something I am passionate about and led me to my second career.

Over the course of the next few months, I will be opening a gym franchise called F45 in Willow Glen.  It’s a high intensity interval training, group workout facility.  I found drive in these workouts.  It gave me a place to go to feel strong, healthy, and in control of myself. I fell in love with it because it was something that I could come to and be surrounded by great people who want to change their lives.  By opening my own gym, I can be the one to help people do that.  It is my post-hockey purpose.  And a constant reminder for why I have worked so hard to get to where I am now.  Whether I realized it or not, after hockey, I was missing the locker room, sense of community, and the friendship of the team.  I can find and rebuild all of that within the walls of the gym.

Starting a business was never something I thought I would do.  And it is much harder than I could have ever imagined it would be.  But it’s been a lot of fun; and it’s been a headache too.  Opening this gym and finding my “second life” is all a part of my process.  I don’t know if this is what I will be doing in 5 years, but it’s what I am doing right now, and I feel the best about myself and where I am that I have in a long time.

In episode seventeen of the 91 Club podcast, Dan has a 1991 Club exclusive interview with Patrick Marleau after his retirement news conference.

END_OF_DOCUMENT_TOKEN_TO_BE_REPLACED

In episode twelve of the 91 Club podcast, Dan talks with former Shark Rob Gaudreau, as he relives scoring the very first hat trick in Sharks history in 1992 against Hartford.

END_OF_DOCUMENT_TOKEN_TO_BE_REPLACED

Free Previews, Perspectives from the Past

Perspectives from the Past: Douglas Murray

Perspectives From The Past features alumni, coaches, and staff revealing stories and thoughts about their experience with the Sharks. This exclusive monthly feature story will be written by those involved, giving an intimate view into their lives and their perspective on a wide range of topics. This week’s author is Douglas Murray.

END_OF_DOCUMENT_TOKEN_TO_BE_REPLACED

In episode eight of the 91 Club podcast, Dan talks with Sharks Alumnus Devin Setoguchi who spins a few yarns from his years with the club, and updates us on what’s exciting in Devin’s life today.

END_OF_DOCUMENT_TOKEN_TO_BE_REPLACED

In episode seven of the 91 Club podcast, Dan talks with Tony Granato about his early hockey heroes, memories of his years with the Sharks, and how that experience has translated to coaching at the University of Wisconsin.

END_OF_DOCUMENT_TOKEN_TO_BE_REPLACED

In episode six of the 91 Club podcast, Dan Rusanowsky relives some of the great comebacks in Sharks history with Bob Errey, Drew Remenda, and Devin Setoguchi, and remembers the 16 Points for Playoff Success that Errey put together in 1994 that still have resonance today.

END_OF_DOCUMENT_TOKEN_TO_BE_REPLACED

Perspectives from the Past

Perspectives from the Past: Bret Hedican

In this edition of Perspectives from the Past, Bret Hedican writes about his journey from professional athlete to the “real world” of retirement. Bret reveals that he found a new perspective recently after attending a virtual presentation given by a former Navy Seal. Bret shares what it’s like to go from Stanley Cup Champion to former pro-athlete, the ways in which he has found success in his next stage of life, and how meaningful it has been to have his wife, Kristi Yamaguchi, making a similar transition at the same time.

END_OF_DOCUMENT_TOKEN_TO_BE_REPLACED

8 thoughts on “Perspectives from the Past: Devin Setoguchi”