Perspectives from the Past: Jaime Baker 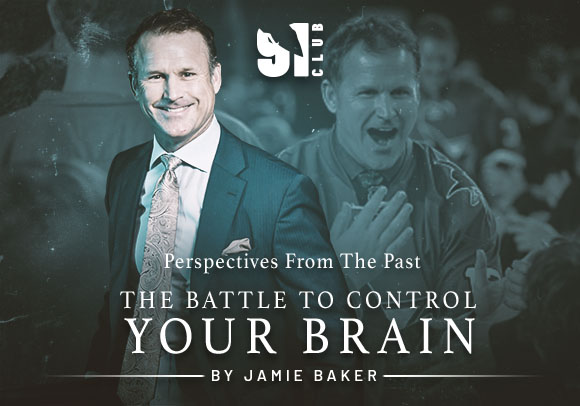 Perspectives from the Past: Jamie Baker

In this edition of Perspectives from the Past, Jamie Baker writes about where he is on his personal journey, how he is (re) training his brain, and how he uses radical gratitude in his daily life and to help others. Jamie Baker played 186 regular season games or the Sharks, scoring one of the franchise’s most memorable goals – the series-winning goal in the seventh game of the 1994 Western Conference Quarterfinals against the heavily favored Detroit Red Wings.  Jamie, a fan favorite, has been a Sharks broadcaster since 2005.

The Battle to Control Your Brain

“I’m trying to come up with, ah, something positive to take away from this, and ah, it was hard because there isn’t much, but, the best thing I think I was able to come up with is this, Gratitude!  It seems to me that all we can do is be grateful for the time we had with them, and for the time we have left with each other.  And that’s all!”
~ Jimmy Kimmel, during his emotional speech at the Memorial for Kobe Bryant at Staples Center

When I watched Kimmel speak it was hard not to have tears slowly slide down my cheeks, but there was also internal warmth in hearing his words and knowing that all the work that I’m putting in to re-take control of my own brain is on the right path.

I won’t go into all of my past, because Katie Strang of The Athletic documented it, including my struggles, in a wonderfully written article.   Here is the link to the article, which is aptly titled “Once at a place of ‘no hope’ Sharks Broadcaster Jamie Baker is gratefully alive.” Here is where I stand today.