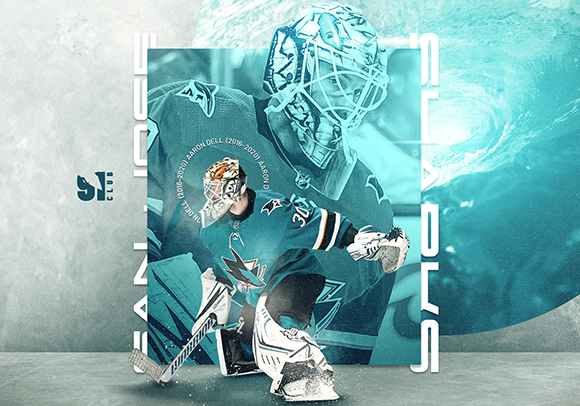 This week’s wallpapers are called “Ocean Ave” and were created by Graphic Designer Nick Adkins (Twitter @ NickAAdkins). They feature Evander Kane, Aaron Dell, and Radim Simek. This is what he had to say about the inspiration behind the art.

“I wanted to highlight some fan-favorite, newer Sharks players with this round of wallpapers. My initial approach was a desire for the wallpapers to capture a nostalgic, ‘Ocean Avenue’ feeling, but it transitioned into a more minimal, reverential, focused tone. Photography was key in these graphics to get this feel of enormous raw energy (the wave) being focused by the player (center shot) with skill on the ice (action shot). Having the photo-frames as large, simple geometric shapes felt appropriate to solidify that theme. That nostalgic feeling eventually came to bear in the subtle distressed-film look as a finishing touch.” – Nick Adkins, Sharks Graphic Designer